The Sons of Rome – Daniel Vidoni

“Nothing in life that’s worth anything is easy.” – Barack Obama

It could be convincingly argued that everyone should, at least once in their lives, pay a visit to the eternal city of Rome, as I had the good fortune to do in 2001. It’s a long flight from Sydney and half way there one starts to wonder if it’s going to be worth it. Ere long, such thoughts utterly evaporate upon first glimpses of basaltic Roman roads, ancient walls, myriad fountains and iconic ruins bejeweling the various quarters of the town.

Perhaps the most compelling of these is the Flavian Amphitheatre which we know as the Colosseum. Initiated 3 years into emperor Vespasian’s rule in 72  AD, the works took 8 years to complete using travertine limestone, volcanic rock, bricks, concrete, and a whole lot of elbow grease. Despite two millennia of erosion and denuding by vandals, it remains a proud and unassailably magnificent monument to its builders and their classical civilisation.

From above, the walls describe a graceful oval wrapping around steep seating for 50,000. At the bottom of this well is a tricky floor housing all manner of beasts, men, weapons, tools and sundry mechanisms purposed to manifest the frequently appalling entertainment of the rabid and sanguine masses above.

Stop for a moment and try to imagine the disturbing roar of the crowd, the clash of metal, blood and bone mixing into uncaring sawdust blanketing the ground. Howls of delight and disgust. There was simply nothing like it in the world then or now and has no problem capturing our imagination thousands of years after its inception.

Memories of that place stayed with me over the years and when I recently had the chance to actually recreate the structure, albeit in miniature, I had no hope of resisting the urge.

Using a relatively recent technological innovation called 3D printing, I was able to transform a detailed architectural drawing of the Colosseum as it currently stands, into an accurate three-dimensional reproduction made of light but strong plastic. The quirky little machine which performs this miracle, zig zags over a perfectly flat plate of glass, depositing a carefully shaped 0.1mm layer of plastic at a time. It then deposits another layer over that and continues thusly for hundreds or thousands of layers until the structure is fully realised. In some sense the structure is ‘grown’ from the ground up.

The process may sound very slow and tedious, and it is, but it is also oddly satisfying to watch. I think the citizens of Rome would have felt the same way as the years went by and the walls gradually went up. They must have known something special was happening, or perhaps about to happen. A little daunting, but also a little wonderful.

My Colosseum is composed of 16 parts each of which took an average of 4 hours to ‘print’. The final result is a 1/1000 scale replica of the ruins as they currently stand. 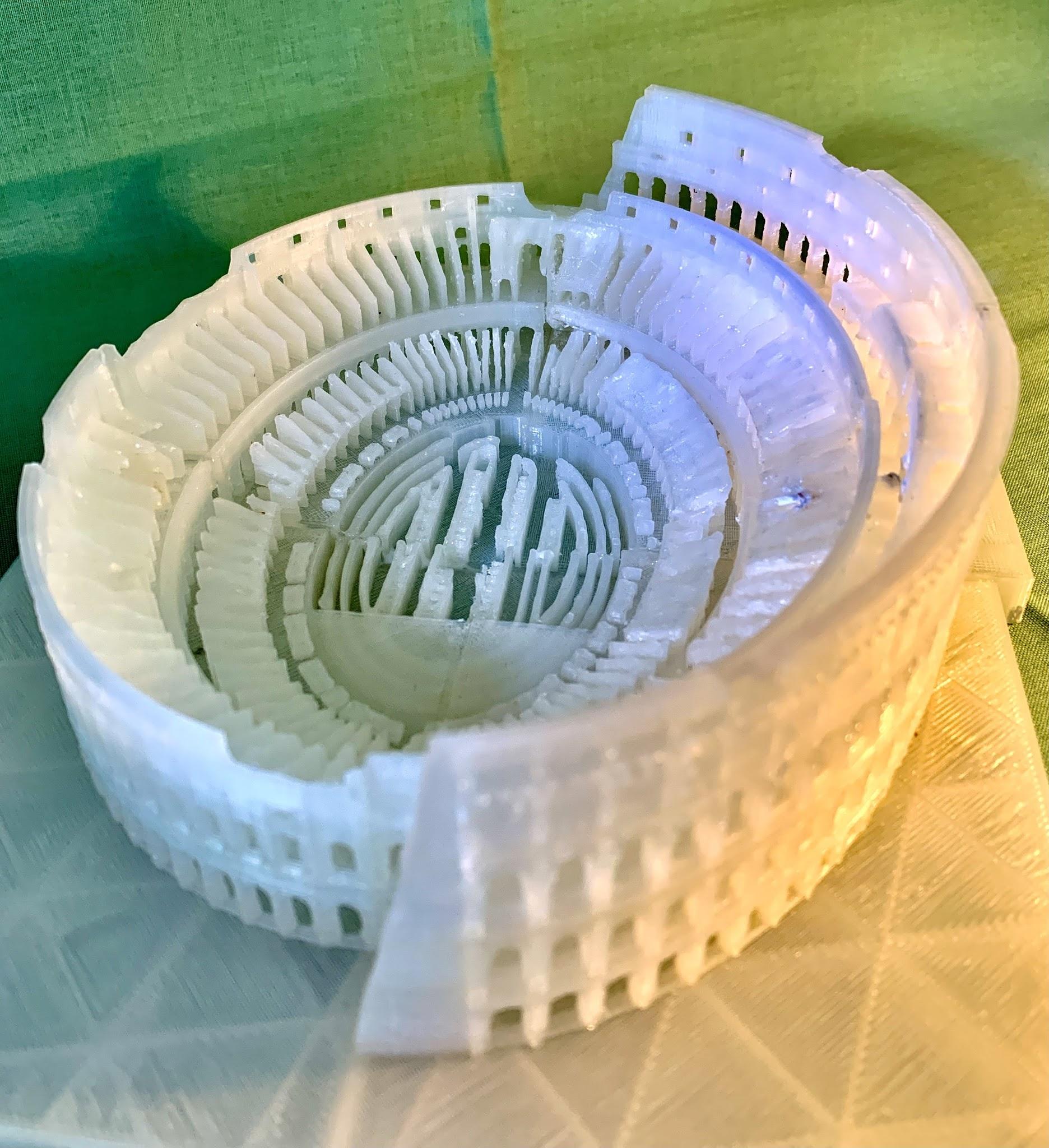 Upon completion I prepared the various parts, glued and sanded the edges, and then sat back to admire the lovely creation. My own mini plastic piece of history which, like the original, if left unmolested, should last for many centuries and even thousands of years.

It’s adorable. In fact it’s so cute that it’s difficult to take seriously if you consider the horrors that the real thing bore witness to. Regardless, as I twirl the model in my hand and admire it’s elegant classical geometry I feel a perverse sense of pride.

Somewhere along the line my ancestors crafted a wonderful masterpiece from mortar and stone and now 2,000 years later, their descendents remember and try in a small way to honor their magnum opus; and no matter its size, or the materials or methods employed, shines brightly and continues to inspire the sons of Rome.

This website uses cookies to improve your experience while you navigate through the website. Out of these, the cookies that are categorized as necessary are stored on your browser as they are essential for the working of basic functionalities of the website. We also use third-party cookies that help us analyze and understand how you use this website. These cookies will be stored in your browser only with your consent. You also have the option to opt-out of these cookies. But opting out of some of these cookies may affect your browsing experience.
Necessary Sempre abilitato
Necessary cookies are absolutely essential for the website to function properly. This category only includes cookies that ensures basic functionalities and security features of the website. These cookies do not store any personal information.
Non-necessary
Any cookies that may not be particularly necessary for the website to function and is used specifically to collect user personal data via analytics, ads, other embedded contents are termed as non-necessary cookies. It is mandatory to procure user consent prior to running these cookies on your website.
ACCETTA E SALVA